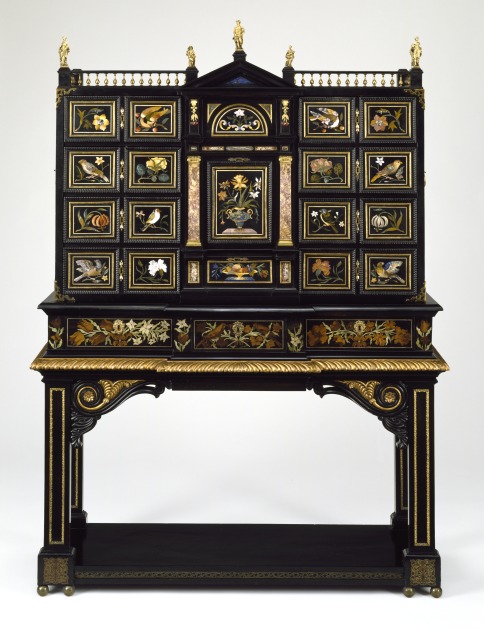 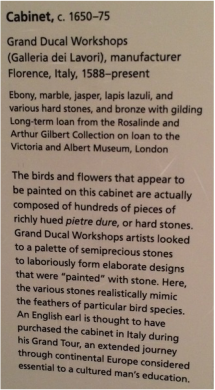 Place card for the cabinet
A cabinet was the object I chose for this assignment. This cabinet was used to hold personal belongings or belongings needing to be kept locked away and safe. It is said, during his grand tour, Daniel Finch (1647-1730) purchased this cabinet some time between 1665 and 1668 (“The Gilbert Collection: Pietre Dure.”). He was an earl, so purchasing pieces of furniture like this cabinet helped to show how off his wealth and status. The cabinet measures at almost six feet tall, four feet and twenty-five inches long, and has a width of one and a half feet. There is great detail in the cabinet’s design. Pietre dure is the technique used here; it is still used today by the same manufacturer. Pietre dure is when the craftsperson uses hard stones to create designs or images (“The Gilbert Collection: Pietre Dure.”). Ferdinando I de’ Medici established the grand ducal manufacturer of works, called Galleria dei Lavori in 1558, later renamed the Opificio delle Pietre Dure (“The Gilbert Collection: Pietre Dure.”). This object was probably made some time after 1558 in Florence, Italy. Today it is located inside the Los Angeles County Museum of Arts, on the third floor of the Ahmanson building. The cabinet piqued my interest because of its great detail and use of color. With the flowers and birds covering the panels of the cabinet catches the attention of those looking at it. The size and number of compartments in the cabinet were also intriguing to me.
​
Techniques used to create the details on the cabinet are eye catching, but once a person realizes how the details were achieved, it only increases the beauty of the entire piece. The pietre dure technique is used to create the images of the birds and the flowers on the panels of the cabinet. Each image is greatly detailed, so much so that they each look realistic. By simply glancing at the images, a person could mistake them for being painted on. A reason why a person might think this is because semiprecious stones are used to create tiny details, such as the small feathers on the birds. Details as small as feathers seem impossible to make realistic looking, but using stones the maker of the cabinet was successful in his or her task. Within art, birds are thought to represent air, one of the elements, which could also be a symbol of freedom (Hall, “Bird”). Other materials used to create the cabinet were ebony, marble, jasper, lapis lazuli, and bronze gilding. Ebony is a black wood, which is likely what the maker used to create the cabinet as a whole.  Materials like jasper and marble were used, along with the hard stones, to make the images of the birds and flowers. On the top of the cabinet there are gilded figures, they are facing forward, placed there to help represent the four seasons. These figures are likely to be bronze despite their appearance, achieved through the gilding process. The gilding process is when bronze is coated in a mixture of ground gold (Kishluk-Grosheide, “The Art, Form, and Function”). The other gold-looking items on the cabinet, such as the keyholes, the border at the base, and a few details in the design were likely done with the same process. The cabinet is not over powering in size, but it is big enough to make a statement. By looking at the cabinet, it is easy to see how it was used to house personal items. The sizes of the sixteen square compartments are about the size of a compact disc case. There are also four drawers located at the bottom of the cabinet. At the center of the cabinet is a compartment, which probably measures at about the size of two of the square compartments if they were stacked on top of each other. On either side of the center compartment are pillars, which could have been made with red jasper. The overall shape of the cabinet is a large square, stands on four legs, and it has a solid base underneath those legs. 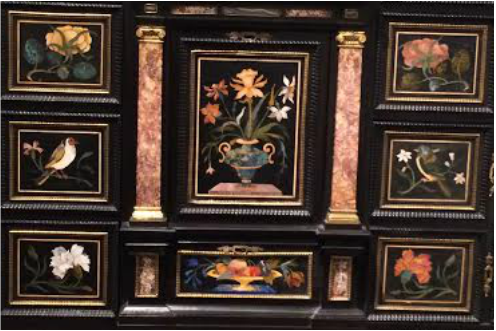 A zoomed in view of the cabinet found on the third floor of Ahmanson Building, Los Angeles County Museum of Arts
Surprisingly, even though this item can be found in present day, during this time it was not only about the use of the item, but about its particular artistic details and the worth of the entire piece. The cabinet was manufactured with techniques popular during the time it was made. The cabinet was likely expensive and it allowed a member of the elite classes in Europe to show off their status. The symbolism of the birds, along with the representation of seasons, also helped to display the owner’s interest in naturalistic settings. Daniel Finch, the second earl of Nottingham and the seventh earl of Winchelsea, likely purchased this cabinet during his grand tour because he wanted to show how cultured, wealthy, and well-traveled he was. He was just over eighteen years old when he went on his grand tour (Horwitz, “Finch, Daniel”). The reason why he may have been intrigued is because of its beauty. Having an item such as this cabinet would have helped bring positive attraction to himself and to his collection of fine furniture. Although he was the buyer, both men and women could have used the cabinet and it was probably considered to be a fashionable item for those who used it.  When it comes to the manufacturing of this cabinet, it is important to keep in mind that, while the Galleria dei Lavori, which is where it was made, housed many different laborers, cabinetmaker would have been the most likely artisan to be responsible for its execution. 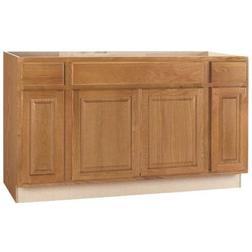 A modern cabinet used for storage. Can be purchased at a local hardware store.
Without a doubt cabinets are still used in present day, but the quality and quantity of them have changed greatly. Homes built today will often have cabinets built into rooms, in a bathroom or a kitchen, for example. These cabinets are used to house less valuable items because they are more commonly meant for storage. Cabinets are not only found in homes, but they can be found in restaurants and stores. These days cabinets are rarely done with as much detail. The details are lacking in cabinets today because they largely serve as storage units. While few cabinets are designed with great detail today, there sizes are comparable to the cabinets made at the Galleria dei Lavori. The reason for such large sizes today is because modern consumers need to house valuable items that might include china. There are also smaller cabinets for jewelry. Cabinets built and purchased to show a person’s status is not as common as it used to be. The reason why Daniel Finch purchased the cabinet is to have an appealing object in which to his store valuables. 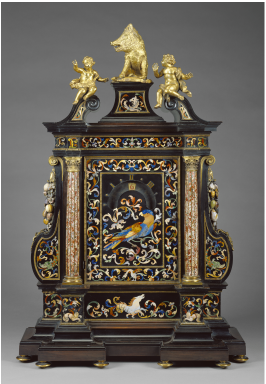 Night Clock, 1704 - 1705, 95 x 63 x 28 cm, 25.4014 kg (37 3/8 x 24 13/16 x 11 in., 56 lb.) The J. Paul Getty Museum, Los Angeles
This night clock is the result of a similar technique applied to the pietre dure cabinet. This clock is on display at the J. Paul Getty Museum in Los Angeles. It was made in Florence, Italy, roughly around 1704 or 1705. The clock is smaller in size compared to the cabinet; it measures at three feet high, two feet long and eleven inches wide. Although the size of the clock, in comparison to the cabinet, is smaller, its details show many similarities to the cabinet. The materials used to make the clock are the exact same as the materials used on the cabinet. By looking at the clock, it is clear the artisan was influenced by the same techniques used by the cabinetmaker of Finch’s pietre dure piece. The colors on both items are the same, along with the black base, which allows for the images and designs to stand out. On top of the clock there are gilded figures; these were most likely achieved by the bronze gilding process. An artist by the name of Massimiliano Soldani-Benzi was the person responsible for the boar figure found at the top center of the clock, and the boar can be an attribute of lust personified (Hall, “Boar”). Unlike the cabinet, the clock has a signature of the technician, Francesco Papollion, who was responsible for making the clock. Another commonality between the two objects is the use of pietre dure,  and here it was achieved using hard stones, including jasper. Night clocks indicated the hours with a dial and illuminated from behind with an oil lamp (“Night Clock (Getty Museum)”). The night clock was not equipped with different cabinets or drawers. Despite the lack of storage space, it still served a purpose for everyday use like the cabinet. The major differences between these two objects are the images on them. The night clock has one main bird in the center, two other birds on the bottom corners, and a white horse near the bottom center. The white horse may be a tribute to Alexander the Great’s horse named Bucephalus. Also, horses are thought to be an attribute of Europe personified, to represent one of the four parts of the world (Hall, “Horse”). There are no large images of flowers like the ones on the cabinet. Flowers are thought to represent life or hope, since they bloom and grow. It is easy to see why there are more distinct looking flowers on the cabinet because there are figures to represent the four seasons on it. Both objects do have a similar design of floral swirls around the larger images and a pillar on either side of the center. Galleria De Lavori is where both of these objects were manufactured. While these are the products of different artisans, they are clearly influenced by the style of the same workshop. 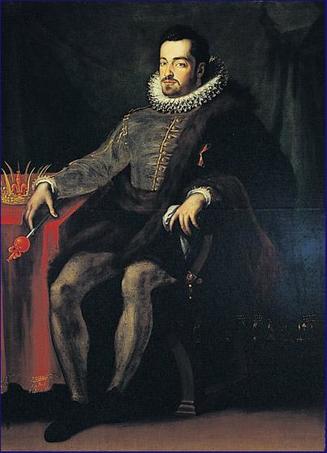 ​Ferdinando I de’Medici is crucial to both of these objects because without him there would have never been a workshop with such techniques. The patronage he and his family contributed to the art world is significant. The workshop he established was founded in 1588 and can still be found in Florence by the name Opificio delle Pietre Dure, previously known as the Galleria de Lavori (“The Gilbert Collection: Pietre Dure.”).  Fredinando I de’ Medici was born into a large family, who throughout history held great influence and sway over the art world. His family produced four popes, Ferdinando himself was a duke, and at one point in time the Medici family were the wealthiest family in Europe (Waston, “The Medici Family”). When he was Duke, he issued an edict of tolerance for Jew and heretics, was considered a good ruler, and his fortune was mainly derived from the Medici family banks (Butters, “The Uses and Abuses of Gifts in the World of Ferdinando I de’Medici”). The reason why Ferdinando I de’Medici is relevant to the cabinet and night clock is because he was the one willing to patronize the workshop that ended up producing such pieces. Patronage was not uncommon in his time; patrons who invested in institutions, such as workshops or churches, did so in order to get something in return. It would seem Ferdinando I de’Medici got more than he expected in return, if only for the simple fact of the workshop still stands and is producing pieces today. The success of the workshop could have also been tied to the prestige of the Medici family name. Fredinando I de’Medici followed in the footsteps of his father, Cosimo I de’Medici (1519-1574) by being a great patron of the arts. Supporting the arts means more than just admiring the artist, at that time it also helped and encouraged artisans and artists by providing them funding or materials. The Opificio delle Pietre Dure exists because of the Medici family’s patronage, their patronage paved the way for craftsmen to make pietre dure pieces, and this workshop continues to operate in the present day.